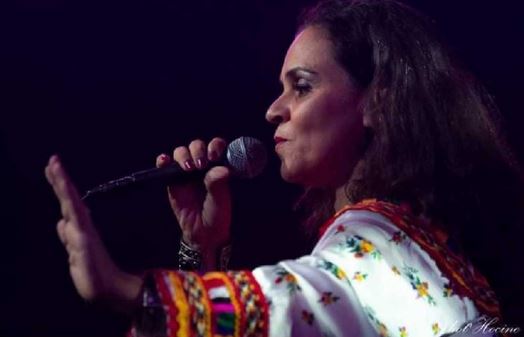 Born in 1971, Nadia has been singing from a young age. From the stands of his primary school in Algeria to the Cabaret Sauvage in France. Her passion for artistic expression is growing more and more in the encounters she makes through her travels. She is passionate about collecting songs of Kabyle elders since she left Algeria in 2008. Most of her trips are dedicated to interviews women from different Kabyle villages.

In October 2009 in Paris, she founded with her sisters Naima and Samia AMMOUR Tighri Uzar, a trio which performs ancient Kabyle songs transmitted by their late mother as well as elders from Yakouren their native village.

In 2012, she obtained a master’s degree in international artistic cooperation at Paris VIII.

In 2018, she was artistic director of the Algeria Plurielle festival in Marseille.

in 2021, she sang in “Do not release me, I will take care of it””Ne me libérez pas je m’en charge” a creation of the wild cabaret on the history of female exile in songs.

Since arriving in France, Nadia has collaborated with various artistic groups and takes part in several permanent or ephemeral festivals in France or abroad: Italy, Belgium, Algeria. She is passionate about other repertoires from around the world. His artistic quest is full of curiosity whether for singing or percussion. Nadia sings in twelve languages ​​and organizes workshops for the transmission of traditional or modern Amazigh songs.

she is working currently on art projects with musicians, storytellers, poets and theater actors.

“Art is freedom” according to Nadia Ammour.